In the Player editor you can set details of a player name A player is an alternate name you use for playing games. For every player, individual statistics are kept, and each player can have one saved table.

See: Add player names : the name (only for a new player), the playing level of the computer players, and you can view and clear the statistics for that player. 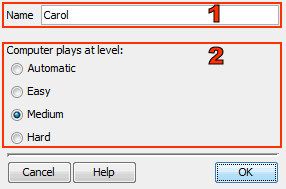 The Player editor for a new player

Here you type the name of the new player. The name must be unique; it cannot be the same as the name of another player.

Here you can change how hard the computer thinks when it's his turn:

Medium: the computer will play somewhat weaker if it is much closer to winning the game than you are. You might be able to win tricky games after all.

Hard: the computer always plays at his best. You will have a hard time winning the game! 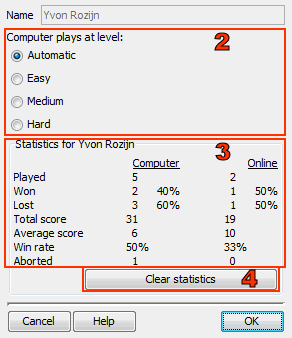 The Player editor for an existing player

Played is the total number of games you played.

Won is the number of games you won.

Lost is the number of games you lost.

Total score is the total score you accumulated in those games.

Win rate is a better indication of your strength than the mere percentage of games won, if you played tables with three or four players. For example, if you win half of all your games, then that is a much better achievement if those were all won at four player tables, then it would be if they were all two player tables.

Aborted is the number of games that you started but didn't finish, or where you asked for a hint.

With this button, you reset your statistics to all zeroes again.